This year has been filled with many incredible windsurfing movies; Rewarded by Andre Paskowski is without a doubt one of the stand out freestyle movies, but now Flo Jung, a team of editors and riders have released a stand out wavesailing movie too. After two years of hard work Boardseeker catches up with the riders of Don’t Let Go to find out more about the making of the movie.

Instead of “Don’t Let Go”, the name of the movie would rather be: “Should have let go!” The crew of the film has been plagued with injuries trying to go big to go for the movie, right from the start when Flo had the idea to make this project, he injured his ankle in Cabo Verde. Then Flo got better and Boujma almost killed himself trying a triple forward in Maui.

In the summer we had a good run in the Canaries injury free on the PWA. I then went to Chile and broke my foot really badly and had to have an operation. I was able to go to Klitmoller to commentate on the event, even though I was on crutches still and there, Flo broke his knee doing a massive back loop.

We split up after Sylt; I went back to Maui to do my rehab, Flo did his in Germany. Finally in April we were all sailing together again and had a few good days of filming when Boujmaa broke his foot, the same injury as mine. Finally everyone was back on track and we managed to finish our last part in Peru all together.

My favourite locations were Maui and Chile. We had a sick swell in Chile this year at Punta De Lobos which was amazing and Maui had one of the windiest winters for a very long time, so we got in a LOT of sailing.

My wife Heidy was one of the main filmers, Manuel Grafenauer was the main editor and Leon Jamaer also helped edit the final parts. Flo was the driving force behind the movie. He has been working really hard, over the past 6 months especially!

It is the first windsurfing movie I’ve been seriously involved in, we all dream about the perfect one, the one that will mark the history of windsurfing, action, lifestyle, editing, music and emotions, elements that make difference between all. Once you get the perfect set up, then you can make un unforgettable DVD, that you  will watch over and over again.

It has been really hard for us, to find funds and to realise our visions on film. We are working with a tight budget to get around and film together.

We had the idea of it back at Cape Verde contest in November, where Flo started filming, then we saw each other in Maui again, talking more seriously about it, and there it went; we filmed a couple sets and we continued trough the PWA tour.

I think we captured already some “gold sessions” and I am especially looking forward to see the Morocco part finalised.

You can expect different styles of windsurfers with very different motivations and backgrounds.

I loved pretty much everywhere we filmed, all the spots were good fun windsurfing, all different, but I always love my place, which is my personal favourite spot.

It began when Flo told me about the idea of making a film expressing the message to others to follow their dreams and “don’t let go”.

We don’t want to show another windsurf movie just with good action and  perfect conditions, it’s more about a true documentation of windsurfers and their life as a pro, travelling around the world to follow their dreams with all ups and downs; I hope you enjoy it.

I really liked Morocco because it’s always something different. I really love the culture, Boujmaa knows all the spots and we had great conditions every time we went there for filming.Peru was an amazing trip as well; we scored epic long waves and we had a good time together.

In the end it was good that I got injured once in a while because otherwise I wouldnt have had the time to works things out!

The movie  shows our life apart from just pure action; it is a documentation about being a professional windsurfer. Besides unreal windsurf action we also want to show when things don’t work the way we planned. With all our injuries, the message “don’t let go” was kind of programmed during the production.  With that in mind, we also want to inspire people to work hard for their goals.

There is an endless list of people we would like to thank for their work on Don’t Let Go: Manuel Grafenauer Kevin Pritchard, Heidy Claswon, Brendan Pyatt plus many more film makers. Michael A. Goldberg did some amazing tracks as a music producer for the film. Plus there is Leon Jamaer, Marc Hene, Manuel Grafenauer that worked for weeks on the postproduction and we want to thank a lot of other people that helped us along the way and finally made this film possible.

Check out the Facebook page for the latest updates: www.facebook.com/DLGWindsurf or visit the Don’t Let Go website for more and to purchase www.dontletgo-movie.com. Soufian who lives in Rabat, Morocco finds himself sailing a lot under the guidance of Boujmaa. The much acclaimed radical wave sailor is clearly the... 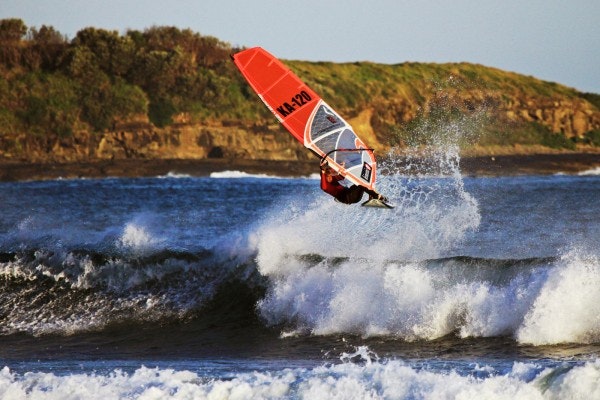 The Australian National Wavesailing Championship is due to take place from the 16th to the 23rd of February within the Illawarra region of New South... To warmer climes and Patrick Fesi posted this video recently. Shot at his homespot in Tunisia it looks like the conditions can go off there....

Soufian who lives in Rabat, Morocco finds himself sailing a lot under the guidance of Boujmaa. The much acclaimed radical wave sailor is clearly the...

The Australian National Wavesailing Championship is due to take place from the 16th to the 23rd of February within the Illawarra region of New South...

To warmer climes and Patrick Fesi posted this video recently. Shot at his homespot in Tunisia it looks like the conditions can go off there.... In the Autumn of 2012, Windsurfing Into the Unknown explored around the famous windsurfing and tourist town of Jericoacoara, Brazil, to see what kind of... Japan is starting to appear on the map at the moment, a boom in the windsurfing scene or at least the PR that is coming...