Yes we are on site here in Podersdorf but sadly our camera gear is out of action. Nevertheless we’ve patiently awaited media from the PWA and in the meantime have been getting all the latest updates from many of the riders. With a rather mismatch of info we are just going to dive in with a review of where we are at and discuss further topics below. 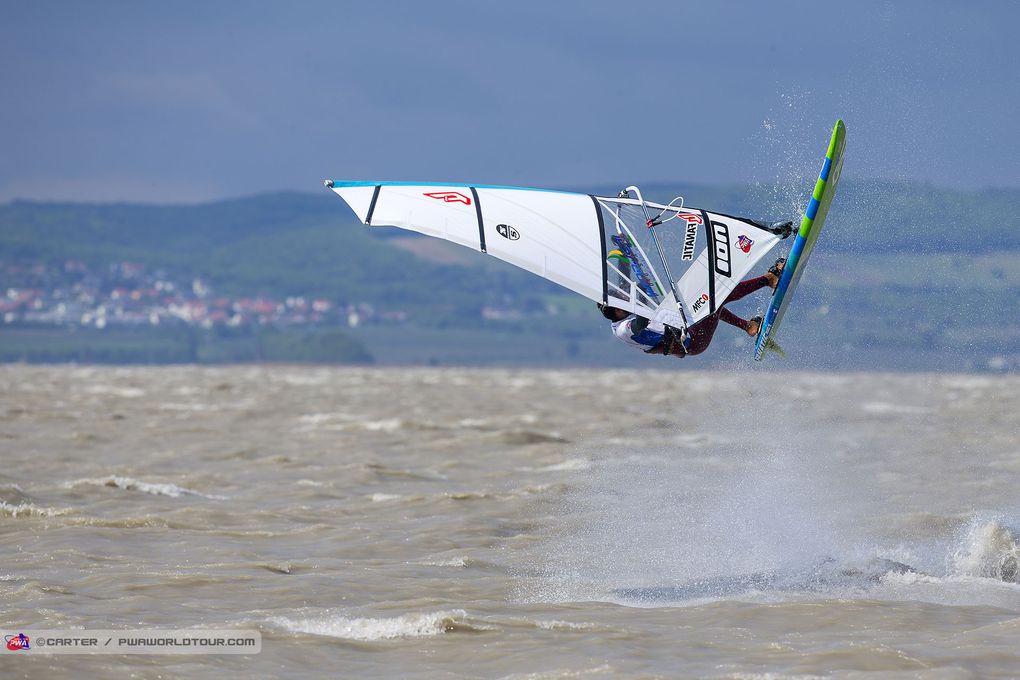 So with a promising forecast from the get go the PWA proactively made the decision to shorten the registration so that competition could get underway as quick as possible. Come midday the heats were in full swing and the riders were rapidly changing sail sizes from 4.4’s down to 4.0’s and even 3.8’s. Board sizes were all in the 90l region and the sun was breaking through to warm up some very cold hands. The first thing to notice was the upgrades to the PWA over the winter period. A fresh new website greeted those following the Live Ticker, what’s more the riders had been working hard on a live scoring system which the PWA implemented for this event. Initially there were a few hiccups but all in all the feeling amongst the competitors is that for a first run the system worked and certainly gave way to a flood of competitors in the PWA office, checking printouts of their heats and comparing move scores. Fast learning was certainly advantageous to those who could understand the system quickly and apply it in their heats. A couple of the biggest changes were the different categories and the fact that there is now no difference between switch and regular stance moves, just pure move scores for what you try. Nevertheless it seems riders are still mixing up switch with regular in almost all heats. One of the guys that seemed to gain the most out of this was the hugely varied Balz Müller, his all out progressive approach saw him mix up high powered old school moves with new school freestyle to see him cause perhaps one of the biggest upsets of the day as he dispatched of Steven Van Broeckhoven early in the single elimination. Concerning the categories the riders who opted to go for moves from as many of these as possible were certainly rewarded highly. The categories being; UP (Upwind Power), DP (Downwind Power), US (Upwind Slide), DS (Downwind slide) and UN (Uncategorised). Within the Uncategorised moves were any with a difficulty rating of over 8 out of 10 points, and some combination/air moves that wouldn’t fit elsewhere. With the categories 10 points for variety were awarded for the first move from that category, 8 for the next, 4 for the next and 0 for the next. All counting Uncategorised moves received 10 points for variety. In the early rounds many of the competitors fought hard with the strong icy winds as we saw some huge moves mixed with huge wipeouts. Air skopus, air kabikuchis and massive shakas were almost commonplace. As the heats progressed so did the moves and of course some shock exits. No more so than those in the third round as Van Broeckhoven was joined by Amado Vrieswijk to sit it out on the bench until the double elimination. Aside from Müller, a crowd favourite of the single elimination had to be the charge of Adrien Bosson as he powered through high powered and consistent moves to advance all the way to the final, where he faced the king of freestyle himself, Gollito Estredo. It was no easy heat as Bosson continued his performance but nevertheless no one would stop Gollito in his tracks and the single elimination was to be his. In the losers final both Ruenes and Taty Frans fought hard for that final podium position after showing solid moves the whole way through. One thing we did notice was the huge amount of new gear on the beach, 2017 sails have already begun to appear, with particularly strong presence from Severne and North who had their top riders competing on the sails already. Some info about the Severne sail is that the limited edition full blue colour from Amado Vrieswijk is in fact not the final colourway and the red/orange combo will be the one. The full blue sail is limited to only Amado and Dieter Van Der Eyken and also happens to have just four battens, a new move for Severne within their freestyle range and yes we picked it up and it is exceptionally lightweight. Also worth pointing out is that the North prototype Gollito was using both days was 4.8m, in fact he only did 3 runs on a 4.0 during the final to land the shifty. He came in and changed to 4.8, despite all other riders opting for 4.0 and 4.4’s. Tonky Frans was another using prototypes as he has worked hard with Sailloft to develop a new version of the QUAD, Adam Sims was also spotted using this sail from time to time. Max Rowe was also on his new Simmer Sails, which we have heard will be called the ACE, we’ll let you guess what the board name might be once it is in production. Talking of boards and to wrap this up, Starboard had their 2017 board on display from time to time, the graphic was similar to this years board but with an additional yellow band.

Whilst the competition went relatively smooth, for some injury struck and perhaps one of the most unlucky guys in recent years is Youp Schmit. Sustaining a muscle strain during one particular move he continued on regardless of the pain, sadly for him and from what we heard this caused the muscle to contract even further and later on he was forced to the medical tent as the injury developed into a muscle rupture. Asking the doctor to do everything he could, the muscle was tapped up hard and Youp continued on through one more heat. Finally having to pull out after a particularly hard forward loop landing, medics and friends had to assist him to the beach and help him change as he looked in agonising pain and realised the extent of what it might mean should he not be able to continue competing. We spoke with him and the pain and upset in his face was heavily present, however a nights rest and the determined young Bonairian was back on the water for as long as he could possibly handle. Props go out to him as he managed to pass through two heats to finish inside the top 10. We wish him a speedy recovery. Our last highlight from the event came from none other than Amado Vrieswijk who managed the charge of his life through 9 heats in the early hours of this morning. One by one he took down top names without any remorse. He showed a repertoire of moves that many competitors dream to show in their best heat; air kabikuchis, skopus both sides, double culos in every heat, double air culos and much more. Making it all the way to the super final, he even managed to defeat Gollito once before the king did his thing and used the motivation of losing to fire him up for the final time to take the victory in the double elimination. Without a doubt Amado was the sailor of the day. That’s about it for now, a second sinlge elimination got underway but with a very poor forecast it appears that tow-in, kicking off tomorrow, will be the highlights during the remaining days of this event. Stay tuned for more on this as we direct you to live ticker updates and more. 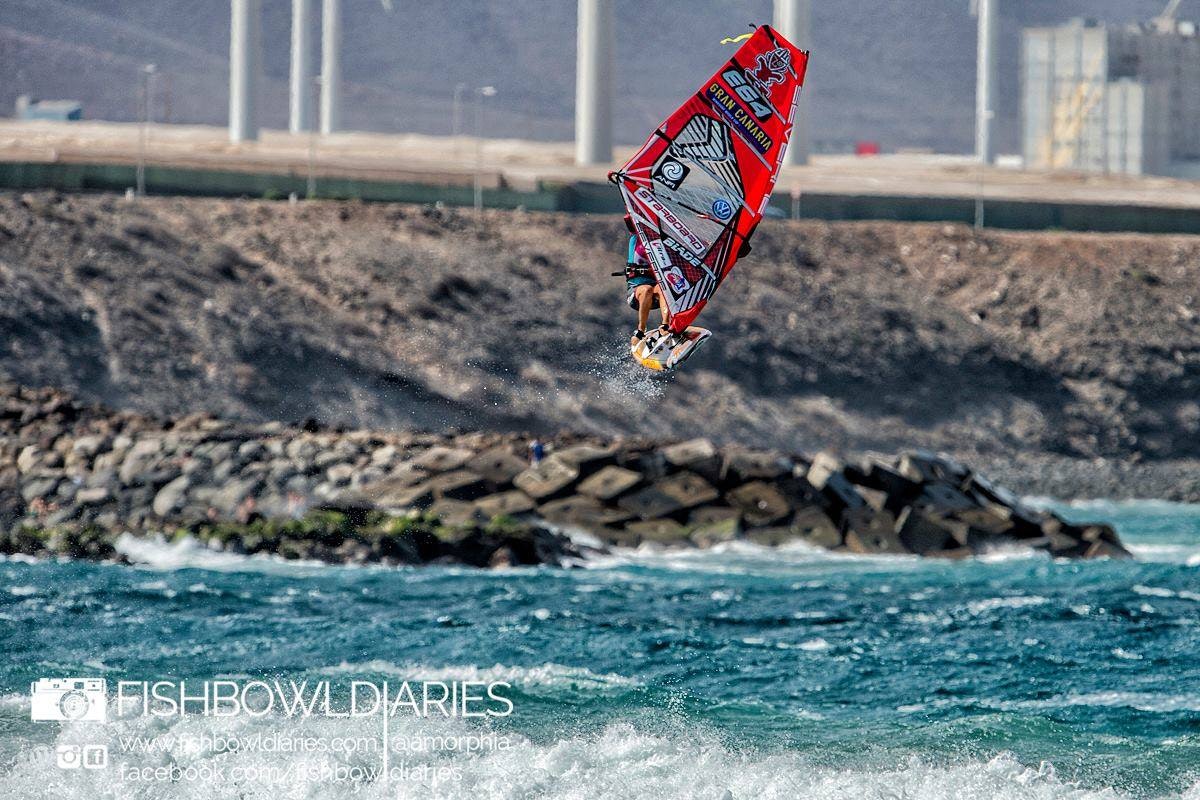 Four years ago Daida Moreno received news that no person in the world ever wants to hear, “you have cancer“. The words resonate with a... A nice clip with some impressive wave sailing from the Maui based Fiona Wylde. https://vimeo.com/165501775 Whilst on a brief 48 hour stop in Gran Canaria we not only managed to score a decent session on the water in Pozo but...

Four years ago Daida Moreno received news that no person in the world ever wants to hear, “you have cancer“. The words resonate with a...

A nice clip with some impressive wave sailing from the Maui based Fiona Wylde. https://vimeo.com/165501775

Whilst on a brief 48 hour stop in Gran Canaria we not only managed to score a decent session on the water in Pozo but... Dieter Van Der Eyken has released a cool new video series following his travels around the globe. The series is aimed more at people outside... Inside PWA Podersdorf - The Final Wrap

With the event all complete and the competitors returned to their home breaks, we take a quick look back at what was to be the...

Inside PWA Podersdorf - The Final Wrap