Choosing the right fin for your board is very important; the correct fin set up should mean you can take your sailing up a level, getting the performance you never thought possible from your board.

With asymmetric fins not only making an appearance but becoming a must have for many windsurfers, Boardseeker decided to catch up with Steve Thorp and Graham Ezzy to find out more about the development and performance of asymmetric fins, specifically the K4 Ezzy Asy Stubby for quads and tri-fin boards. 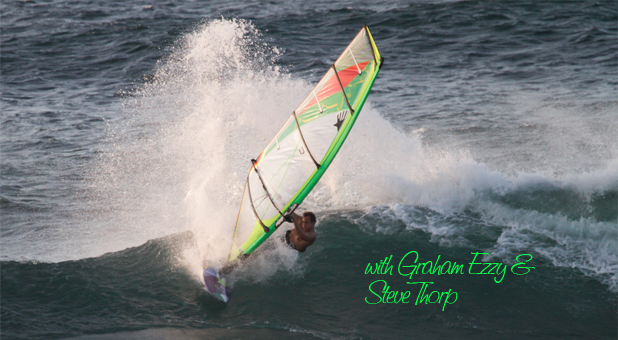 The Ezzy asymmetric fin has a similar template to the Stubby, but everything else was designed from scratch. We wanted to design a fin in conjunction with Graham Ezzy, basically to make the ultimate front fin with the help of one of the world’s best and most progressive riders.

Obviously there’s nothing new with asymmetric fins for riding waves, surfboards have used asymmetric front fins for eons and we also use them for speedsailing.

We knew there were performance gains to be made for waveriding, so we started out by taking our existing fins in bigger sizes and grinding them down to make smaller asymmetric ones; this is much less expensive than making moulds. Even though we expected a performance boost we were a little surprised by just how much better across the board the fairly roughly foiled prototypes were. They seemed a little bit quicker, a little earlier planing, a little better upwind, a little more hold, grip and drive; not a huge amount better but a noticeable amount everywhere even at this early stage.

It seemed a little embarrassing sending Graham such rough looking fins, (the composite isn’t easy to polish back up like g10.. ) but it was the quickest way to get things rolling.

At this point I also tested the effects of ‘cant’ or tipping the fin over slightly towards the rail. It definitely made the board very sweet to gybe, but this didn’t translate to wave riding, it just felt like the fins lost power and drive during a turn. So, we decided to make the fins upright, although more testing into very small amounts of cant may prove useful.

NB on surfboards ‘cant’ is used to make the board easier to tip onto it’s rail and initiate turns, but on a windsurf we have foot straps and our connection to the rig to make this pretty easy anyway.

With such positive initial results it was easy to commit ourselves to investing in new moulds and producing the first ‘moulded’ prototypes. We decided to start with a flat inner foil and sharp entry, this is the same as most surfboard fins (most of the top pro surfer’s still use FIF) and is the simplest to design.

As an asymmetric fin has twice the foil on one side, it made sense to make the fin slightly wider (chord) than normal and slightly thinner. We moulded the first prototypes in two different stiffnesses to see how this changed the performance, also being aware that the asymmetric-ness made the fins a little stiffer when bent outwards (handily more flex when bent inwards). We needed to produce different ‘toe in’ angles for the fins as well so we could explore this parameter and also different boards would have different optimum toe angles and different box angles.

We sent this first batch of various sizes, angles and stiffnesses to Graham in Maui to test.

We all felt the fins performed amazingly, but all agreed they seemed ‘twitchy’ in a straight line regardless of the toe angle. We put this down to the sharp leading edge and flat inner foil, which turned out to be the case.

Our next series of prototypes had a more rounded front radii and positive inside foils and we all tested these until we agreed we had the best mix of stability and performance. It was a long process but we wanted to get them perfect first time round.

I’m out of the world on my way to Baja, so I unfortunately can’t offer a full response…writing on my phone hurriedly before losing service. But I will say that I absolutely love the fins. I use 10s with 2 degrees of toe and a 16 or 17cm center fin, depending on conditions. I find that I’d rather ride a smaller middle fin by a cm than go smaller on the sides.

The asy fins have opened up a new level of wavesailing for me. I can turn tighter and faster. And most noticeably I can more easily carry speed through the turns.

I am very proud to have my name on them.

Is the Asy right for you?

Obviously, you need a board with front fins, so anyone with a quad or tri (I have tried them as rears but feel they are too asymmetric for this).

They will suit any conditions from big punchy down the line to small mushy onshore, light winds or full windy.

They will basically add a lot of drive, hold and grip to the rail of your board, making it turn more on the front foot -great for full power gouges and hucks when it’s firing, or just more speed and drive in weak mushy conditions.

You can also use a smaller size fronts than you would normally. We’re finding most riders are using 8’s in their quads and 10’s in their tris, but there have been calls for smaller sizes so we’ll be doing 6’s next.

Why are asymmetric fins the way forward?

I feel that asymmetric fins are here to stay as without doubt they give a performance advantage over standard symmetrical front fins (as they have in surfing). They are more efficient and basically give more lift for the same drag, so you can use smaller fins for less drag, or get more power into your turns with the same size fins.

The main draw back seems to be setting them up and getting the toe angle correct. You need to aim for between 2.5 and 3 degrees of toe, although some riders are liking the fins outside of this guideline. We sell the fins with +1 or +2 degrees toe and you need to select the angle depending on how much toe your boards boxes have. I think this extra complication is maybe putting people off, but I feel a little time measuring boxes and trying the Ezzy fins is well worth it. See guide below.

The fins are made from a composite material, similar to the more expensive moulded surfboard fins such as glass flex. This gives them a stiff base with good flex in the tip with a good foil thickness. The material has a very good reflex and memory, meaning they don’t stay bent after loading and spring back quickly.

Advantages other than the great performance are that they are very light, unlikely to ever injure you and are a lot cheaper than the alternatives. All the K4 fins naturally have more looseness and grip than non-composite fins. Remember too that you can chuck them in the dishwasher to bring them up like new!

How to measure your board’s boxes ‘toe angle’

Choose either +1 or +2 degrees to bring each fins overall toe angle to ideally between 2.5 and 3 degrees. More toe will make the board feel very turning, less toe more drivey, but too much or too little toe will cause unnecessary drag. Bare in mind that the shape of your board and the conditions you sail in will also alter the optimum toe angle slightly. That said a wide range of angles will actually work fine but just give a different feel and different compromise between looseness, hold and speed.

Find out more about K4 fins on their website here. Maui is without doubt the most well known windsurfing Mecca, attracting hoards of pros and holiday makers every year, ready to take on the brutal...

Maui is without doubt the most well known windsurfing Mecca, attracting hoards of pros and holiday makers every year, ready to take on the brutal...