The 5th ranked PWA wave sailor, Dany Bruch, is known for his progressive wave riding, bringing incredible moves into smooth riding. Here Dany takes you through how to do his two favourite moves, the frontside and backside 360.

The Frontside 360 is a 360 degree rotation during the frontside surfing, i’s one of the most exciting feelings in waveriding.

Basically you need to have a nice wave and create a lot of speed in your bottom turn. Then face the lip with your board beyond vertical, at 11 o’clock, give a strong whip with your hip and pull back your head to get the push of the wave, rotate and open the sail to get the power away and carry on sailing.

Before learning the frontside 360 you should be able to create enough speed in your wave riding turns…once you are able to do some nice hits, either frontside or backside…aerials back or frontside would be good to know how to do to make the learning easier too. You basically need speed and a bit of control to go for the first attempts.

The backside 360 is a similar move in terms of rotation, but has nothing to do with the frontside one. I would say it is quite a bit more technical, so again, you need speed riding backside, you need to be able to create a little “pop”, to boost into an aerial backside and smack the breaking white water behind you’re body. You do half of the rotation before having hit the section, so that the power of the wave together with a pull on your rig does the rest, making the final part of the rotation to carry on sailing.

You should be powered up on small sails to make it easier, 5.0 down I would say, medium size waves are recommended too so that they help you get that push from the wave to make the whole rotation.

How Long Will It Take?

It depends a bit on the intensity you are working on a new move, you could probably get some nailed quite soon, but until you can say that you control one it always takes some time. A few sessions to get the first ones, a year minimum until you know exactly what to do. I always think that to learn a new move properly you need a years time minimum!

KEY POINT – Timing is really important in this move, as you have to choose the most critical section of the wave to start the rotation, if you are too early or too late…you won’t be able to do it!

KEY POINT – Again, timing is really important, but more important is to understand the last phase. I’ll explain roughly; normally in front of each wave, there are little bits of chop that can allow you do a little aerial backside. So you look for that, check the breaking section of the wave at the same time and try to pop up into a backside aerial, pushing the sail into the wind and leaning your body weight on top of the gear, smacking the lip or white water. Once you’ve done that, you have to pull your rig around to get the wind and power out of the sail to finalise the rotation.

For both of the two moves there are existing variations on how to do them, for example you can do the frontside 360 as a whole aerial down the line, but to start with these twp is good and hard work already, so enjoy the process and good luck! And never give up! 😉

Find out more about the up and coming wave clinic with Dany Bruch on our sister site Boards: Adam Lewis and Dany Bruch Coaching 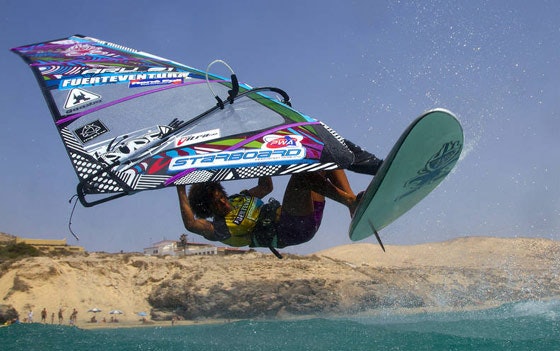 The 2012 World Champions have now been crowned and Boardseeker catches up with some of them; finding out more about the title winners with a... Foward Looping with the BWA

The 2012 World Champions have now been crowned and Boardseeker catches up with some of them; finding out more about the title winners with a...

Foward Looping with the BWA