For many a teenager the thought of going straight to higher education or into a full time work directly after school can be a bit of a bold step. A large portion will opt for the classic ‘gap year’ approach, it was estimated that in the UK alone some 2.5 million under 25’s took a gap year in 2013, ironically the average age turned out to be 23 suggesting that many went directly into higher education as the recession struck jobs became harder to find. So rather than waste a year job hunting a large number took to the seas and the skies to spread their wings. One such person is German freestyler Marco ‘The Lufinator’ Lufen who dived head first into his windsurfing passion and joined the route of most PWA freestylers from Fuerteventura, to Brazil, to Cape Town and beyond. Within 6 months of starting he finds himself training with a multiple times European champion and past world champion at a secret spot in Brazil, just sleeping on the beach, totally involved in the sport, there are really very few chances like that outside of windsurfing. However, despite being very talented Marco strongly believes that it really is just one year of action for him before education takes hold, read his interview below.

With the purse strings drawn tight for companies world wide, this brings up an important topic of pushing up and coming new talent, are the brands doing enough to support this? Will we see a hit on the world tour in the future, or is there another person just around the corner who will step in? Feel free to discuss in the comments below. …we decided to go with Andraz Zan and Steven Van Broeckhoven… It was so cool, we just slept on the beach and sailed with nobody on the water except us.

Boardseeker: When did your training for the world tour begin?

This summer in Fuerteventura. I went there to get back into windsurfing after not having been on the water for 3 months due to school. It was a really fun trip and I met so many awesome people.

Boardseeker: So when did you start windsurfing?

I started windsurfing in Greece when I was just 9 years old! I saw my dad windsurfing and I wanted to be like him, they never forced me to do it but I really wanted to windsurf. I had to learn on a 88l WAVEBOARD, maybe that is what pushed me.

Boardseeker: Now you are in Brazil for your first time, Jeri(coacora) is pretty popular this time of the year, how is it at the moment?

The trip has been awesome so far! I met a lot of new people! It is just a crazy place which totally broadened my horizons already a lot. It can also get pretty cool when it was quiet during September and October, now it’s pretty popular and the beaches are super super crowded! So we decided to go with Andraz Zan and Steven Van Broeckhoven to a spot called Maceio, a kind of more secret spot! It was so cool, we just slept on the beach and sailed with nobody on the water except us! Was awesome! Now we are back and the crowds are still here so we do some lagoon tripping…

I do believe that many people realise that that have to pay a lot for being a semi-pro (when they are not sponsored) so they ask themselves if this is worth it?

Boardseeker: How long are you there until and what are your plans after Brazil?

I am here until the 18th December than home for Christmas and than on the 28th December I go to Capetown for three months!

Boardseeker: Ok now make us even more jealous what is the 2014 plan and will your one year out become 2? 3? 4?

I certainly won’t do another year as I realise that being a pro “pro” where you even have to pay for equipment it is not worth it! I really enjoy it right at the moment but I think I can not afford to do this for another year and I also really want to study! I realise that being educated means a lot! In the small fishing village of Camocim the kids are not able to go to school because their parents have no money! So I really saw that education is a privilege! One of my main reasons though is that I really spent so much money on equipment, it is ridiculous if I told you honestly how much.

Boardseeker: So would you say there needs to be more money in the sport or we could soon see many pros and/or wannabe-pros dropping out? Maybe it is lucky the world tour is very much a European tour, perhaps this is why the EFPT is growing in popularity?

Well I do not wanna go too much into detail but I think this is likely to happen. I do believe that many people realise that that have to pay a lot for being a semi-pro (when they are not sponsored) so they ask themselves if this is worth it? Is it worth the financial stress? Yes I really do believe the EFPT tour is growing in popularity because of this and that is for sure one of the best things that could be happening right now. The EFPT has such good access for new people to competition and it is perhaps a chance for brands to take note of who the next world champion is.

I would really like to say more about this, about the ‘professionalism’ of the sport but I would need more time. Boardseeker: So you with this in mind do you want to do the full PWA tour next year?

I will only do a few events as I have a limited budget. I simply can not afford so much money. I think Fuerte, Podersdorf and Sylt…

Boardseeker: How has training be going then, what moves are you focusing on?

Well training is good so far. Sailing in Jeri on the outside showed me that doing burners in flat water is not everything, you also gotta stick ’em in the chop! Same with regular duck, it drives me crazy as I felt like I was learning completely from the beginning again.

Boardseeker: Many will agree that competing and becoming a pro isn’t everything, what advice would you give anyone looking to take a gap year like yours in water-sports, is windsurfing the ONE?

Windsurfing is definitely the one! The happiness and the joyousness the people bring with them is awesome! Windsurfers are a great type of people, there is nothing quite like them. Energetic and honest, I couldn’t recommend this sport enough. Boardseeker: What would you say is the most ultimate moment you have had to date from this sport?

For sure the trip to Maseio during the last days! I would never have experienced anything like it if it weren’t for this sport. Waking up at 5am watching the sunrise than Acai for breakfast, followed by some full power sailing with mister full power himself, Andraz and his travel buddy Steven Van Broeckhoven! It was awesome to be able to do the highest shaka of the day, I think even higher than Stevens! Haha, but the only one and than grilled fresh fish for dinner! We could choose them right from the sea pretty much as the fishermen brought them in that very morning! Lastly, sleeping on boardbags with fullmoon, it was unimaginable. The PWA tour came to a close a few months ago, but we’re still seeing some great videos from the action. From this one of... 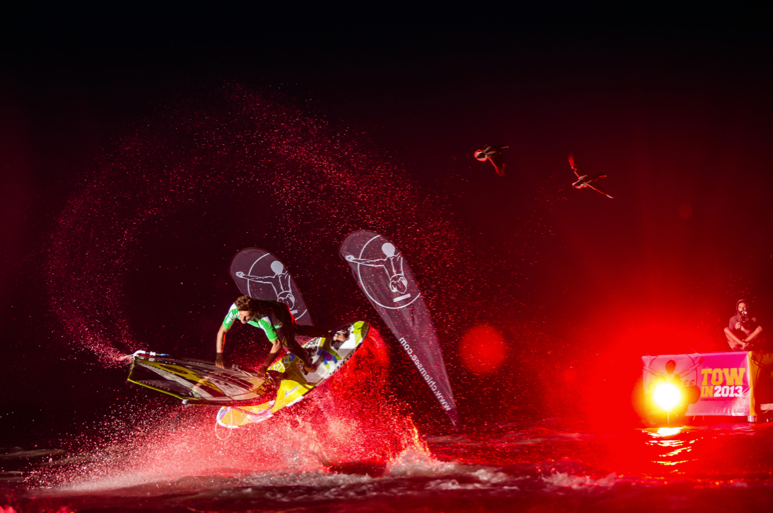 Tow-in windsurfing is going from strength to strength, with 2013 being one of the best year’s for this side of the sport yet. Find out...

The PWA tour came to a close a few months ago, but we’re still seeing some great videos from the action. From this one of...

Tow-in windsurfing is going from strength to strength, with 2013 being one of the best year’s for this side of the sport yet. Find out... The turn of the mighty Kenneth, the Danish wave sailor who can certainly hold his own when the strongest of strong winds blow. The question...