Have you ever pulled up at the beach to see conditions which make you think twice about going out? Steve Thorp is no stranger to adverse conditions, and so it was no wonder that he found himself staring, or perhaps more peering, into the misty gloom at one of the North East’s rarest spots last week considering the situation.

said Steve. In the midst of the heavy industry of the surrounding area there is much that could rob a man of his motivation, but despite a huge power station, freezing temperatures and barren landscape, this was one of those days where you had to go. Steve wasn’t alone out there; Newcastle’s Gabe Davies was already out surfing with the Northcore jetski in support, which underlined how the surf community saw conditions. Gabe was quickly impressed with Steve’s efforts,

“The windsurfer out there did really well, I saw him get a really great wave and hooted him as he flew past”.

On land was a small crowd of hardened surf fans who were excited to see what mother nature had in store for them. With only Gabe, the jetski and Steve in the water, with a fair few surfers suited up and ‘thinking about it’ the crowd rightly expected a bit of a show. 1 degree air temperatures are hard to get motivated for, but this day also saw a 12 foot at 10 second swell pumping out of the 35 miles per hour wind blown blizzard, bringing epic conditions to what is effectively the best man made reef in the UK. What followed was a session to remember, but a session which ended up testing the resolve of both Steve and the gathered crowd who were there to witness him go big.

Steve’s first few passes produced a few tasty drops and less dead spots than there could have been- in these conditions the wind has to pass over a 40 foot high pile of cement, steel works slag, rocks and sand before it suddenly meets the wave, so wind conditions can be fickle as there is some wind shadow.

Heading upwind out to the very end of the point before powering back in throws up even more of an obstacle, as in order to get in to the wave from the takeoff you need to stay as tight as you can to the point which has an even bigger lighthouse on top of it. Even this lighthouse was getting hit by the force of the storm on this day, as whitewater exploded up to 100 feet in to the air all around it.

At times the only marker you would have in the midst of the walls of water was the very tip of the mast, and that was barely visible even when looking through a telephoto lens. Suddenly, with the rising surges of the swell Steve would come rampaging in to view, waiting to see how big the set wave would actually turn out to be as the swell sucked up the water off the reef.

It was at this point that the first alarm bell rang. Suddenly, the wind vanished as Steve approached the takeoff. For a split second he was down, powerless and stationary right in the impact zone of the set, which loomed behind him. The crowd drew a collective breath, seeing Gabe scratching for the horizon and knowing Steve was in the danger zone. Even though Gabe got hammered by the wider first wave, he was quick to point out the reason for him being out in these conditions when back on land, saying “that wave smashed me, it landed right on my head; it was pretty powerful, but I guess it’s really good training for the serious big waves I am trying ride in places like Ireland”.  It looked like Steve was about to be doing ‘some big wave training’, but fortunately the wind suddenly kicked back in.

15 minutes more carving saw the end of Gabe and his crew, which left Steve out on his own for a little while, and things were going sweet. A few more surfers eventually decided that they would have a go as well, providing the onlookers with more entertainment as they attempted to jump off the pier at the head of the point, so there were a few in the water and everyone seemed to be enjoying the heavy conditions.

It was just like any other run from outback, except this time Steve delayed his bottom turn by about two seconds which put him out on the flats. Half way through the turn the full size of the wave he had taken became apparent. A slight lull in the hoolie that had been reliably blowing previously made for one of those make or break moments. This time, it was a break moment.

A break moment which specifically broke Steve’s mast foot and separated his sail from his board and the man from all of his kit. Into the strong rip current went the kit, with the board getting smashed by a couple more waves while the sail vanished from view. In what seemed like a reasonable amount of time Steve found himself out of the lineup courtesy of the rip, around 200 meters from where the impact had taken place. Gathering himself on his board, Steve began searching for the missing sail, which he rightly concluded must also have been taken by the rip. The wipeout happened at 2:52pm. Steve didn’t find his sail till 3:06pm, which meant he spent 14 minutes or so paddling his board in a Z off the end of the rip.

“The mast & boom were fine, but the sail was in two bits; I wanted to try and salvage it if I could…”

said Steve, but that 14 minutes paddle resulted in him getting washed about quarter of a mile off in to the middle of the river mouth, right to the very edge of the shipping lane. This increase in distance from the land meant that he was fully at the mercy of the strong wind which was no longer slightly shadowed by the point itself.

10 minutes of constant paddling made no difference to his position, and after some discussion the surrounding crowd concluded it was starting to look a little bit dangerous. Factoring in what could clearly be seen as unshaken determination on Steve’s part, it was decided the best course of action was to call the Coastguard, just in case things got out of hand.

“I’d actually had to scrap the idea of paddling in the sail by then, I was just going backwards- so i tied the sail to a shipping buoy and just paddled the board for the land as hard as i could. I’d also noticed the full power of the rip when I was next to the buoy- it was dragging me and my board underwater as I tried to fasten the sail to it, maybe 5 knots of current”

added Steve, and thankfully the effort eventually paid off as he broke free from the current and managed to make headway. The Coastguard had launched but were informed that there was no longer any need for them, and the crowd returned their gaze to the intrepid surfers who continued dropping in to the bombs that were ripping through the lineup.

Gabe summed it up after thawing his hands out:

“That was an awesome day on the east coast, which really brought together all the extremes of surfing here. It’s rare you get this spot this good, it only breaks a handful of times a year; I guess it’s just typical a very solid 3-4m swell came together with a mix of hail storms and freezing winds!”

Sadly for Steve his day wasn’t quite finished, as he still had to summon up the energy to rig up another sail and set out to retrieve his rig, which involved negotiating a two mile forearm burning leg back downwind tp the shore.

After the intensity of the day had passed Steve had some perspective:

“The whole thing really was an incredible experience, but it brought home how careful you have to be. You never want to waste the coastguards time when you’re just meant to be out there having fun, but it’s great to know that they are there in case the unexpected really does get the better of you. I’d like to say thanks to everyone” Well it’s no secret that Ben Proffitt ended up under the surgeons knife recently. However, the full extent of the damage and how it really... 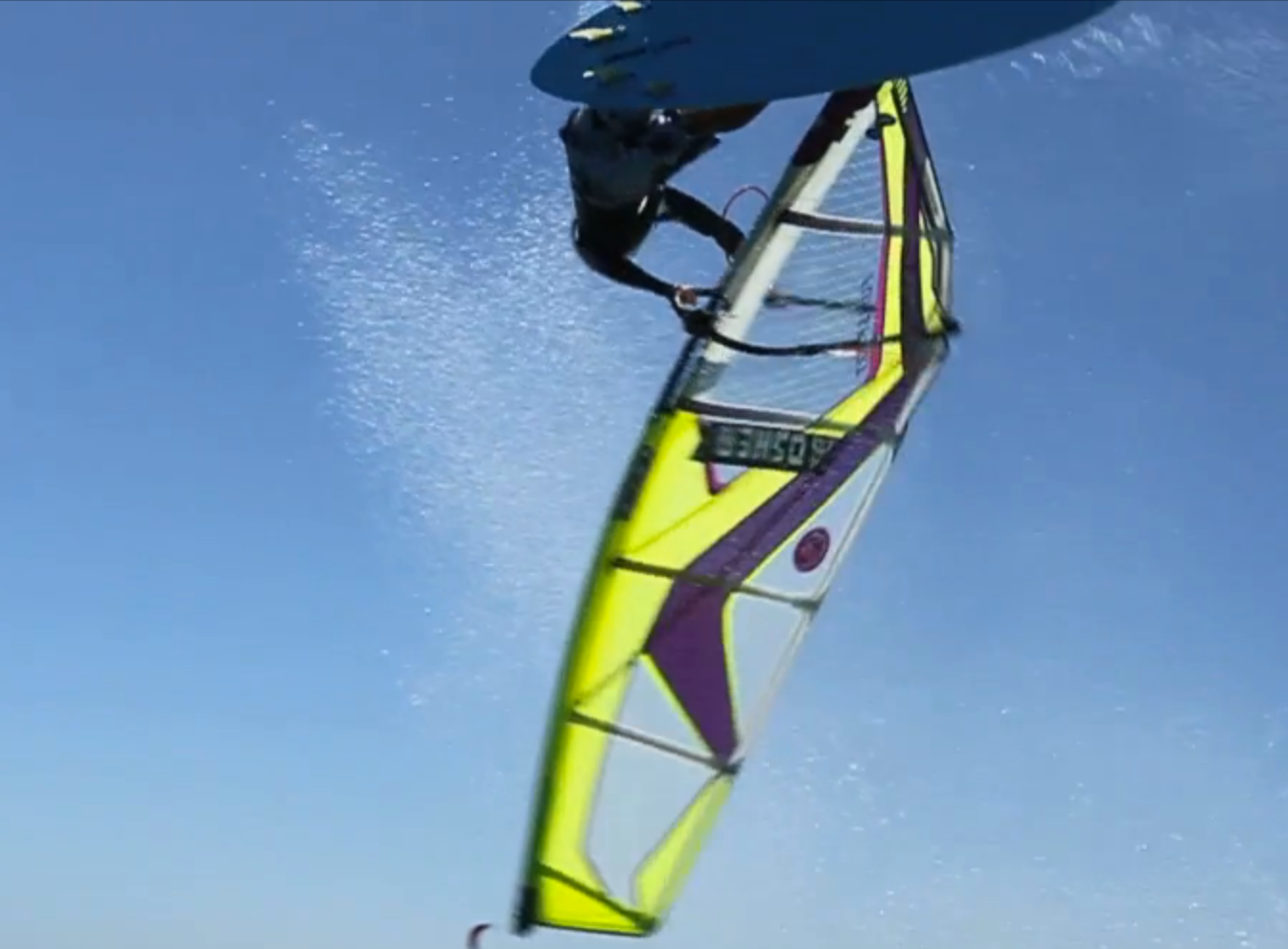 As you may have noticed, Ben Proffitt had a pretty savage crash whilst attempting a tweaked pushloop. It looks like he either took off a... UK Wave Champion, top PWA windsurfer and in recent years the voice of the PWA’s live stream, Ben Proffit has been training hard out in...

Well it’s no secret that Ben Proffitt ended up under the surgeons knife recently. However, the full extent of the damage and how it really...

As you may have noticed, Ben Proffitt had a pretty savage crash whilst attempting a tweaked pushloop. It looks like he either took off a...

UK Wave Champion, top PWA windsurfer and in recent years the voice of the PWA’s live stream, Ben Proffit has been training hard out in... A week on the road. Being on the road as a pro windsurfer can, to many people, seem like the dream life. And in some occasions...

Explore and Play grew in popularity a few months ago when the first episodes were released. Now the fifth episode is out and ready for...