Proffit’s training diaries have just returned to our screens, ahead of the upcoming Pozo PWA competition…we’ve already seen Koester is on fire, but what more can we expect from the upcoming diaries? Who’s ripping? Who’s crashing? What new moves are being landed? And what equipment is working best in the hardcore Pozo winds?

*The next Pozo diary is here! Epic action, bigger crashes, as Proffitt promised things are hotting up!!!

Boardseeker catches up with the man behind the mic, Ben Proffitt, to find out more…

Tuesday was the first day it’s really started to look good, it’s been windy but the waves haven’t been there just yet…until now!

All the local guys are here, Alessio (Stillrich) looks good I would say, Moritz (Mauch) has some good wave moves apparently, I haven’t seen much of him yet because he’s been studying, but he’s got some moves. I think Alessio is definitely one to watch, he’s young, he’s focussed and he did well here last year but then couldn’t do all the events. This year I think he is doing all the events, so it will be interesting to see how he gets on.

Victor (Fernandez) is here, he’s definitely got better since he’s been here I would say, he was looking quite good yesterday. I don’t think Victor’s doing push forwards yet, he’s so consistent on the wave, but I don’t know if that’s enough (to win)? I wouldn’t like to call it!

Koester…no point even mentioning him! He was f***ing good.

Josep Pons, he’s a local guy, is looking really good. He’s going for push forwards, doubles, that kind of thing. If he enters he could do really well, he didn’t enter last year, but it’s top 32 now so he will have to go through the trials to make it into the competition. I imagine there could be a few good guys in the trials, so it could make things really interesting.

I tell you what, it’s still hard to tell Bruch and Daida apart!

Daida (Moreno) has been on the water more than anyone, she looks like she wants to win again. Her one handed back loops are just sick, plus she’s got her wave 360s and everything, she’s really going for it. It will be great to see Iballa on the water too when she’s back from Fuerteventura, could be quite a match up this year!

Mini Antoine (Martin) has been the guy to watch with some insane crashes. He is just going for everything and crashing really hard, there’s one crash we got on film that will be coming out in the diaries that is just insane, it looked like he almost killed himself in that one!

Everyone is sailing bloody good, it’s going to be hard this year I reckon! I mean it’s hard every year, but this year especially!

I do think we’re going to see the usual faces up there, but saying that there are more and more people sailing better and better, so it’s not going to take much for there to be an upset.

It’s only just starting to warm up now, it’s getting a bit closer to the event, people are starting to push themselves a bit more now…you can feel it’s starting to hot up! It was quite relaxed, then on Tuesday it really started to step up and I think people are just going to be more and more on it as the competition draws closer.

I haven’t seen Koester land a cheese roll into back loop yet, but I do have a story from Australia…

Koester gave his camera to Sean O’Brien and asked if he could just film something quickly, he went out, first run hit a wave, cheese roll, back loop, landed and sailed back in. Thank you very much.

That was the story, and I know these things get exaggerated but that was from Sean who filmed it, so I’d say it’s pretty close to the truth!

A lot of people are trying the reverse, I haven’t seen anyone make one yet, although I know a few people are. It’s a backside grubby thing, actually I have seen Koester get one, but it’s definitely not a consistent move for anyone yet. It will be interesting to see how the judges score that one. Alessio got a clew first goiter yesterday. People seem to be working on their wave moves more than anything else, and really trying to nail those down.

Jumping, it’s just a case of going high and more tweaked, but I don’t think anyone wants to kill themselves just yet! The waves have only just started to pick up, so it looks like the action on the water will from now on too.

If you haven’t seen it, here’s the first edition of the training diaries…

Equipment wise it is a real mixture, there’s not one thing that works here. It’s not like 4 battens is the answer, everyone is just using what they usually use that suits their style.

It’s the same with the fins, certain people like certain things, there is a total mix from twin, tri and quads.

I’m using the 5 batten Icons, and the quad boards. I’ve got a Frugal with me too, it’s quite wide for Pozo but it’s good in the lighter stuff (light for Pozo means 4.2 weather!). It has five fin boxes, I had it set up as a tri fin, then last time I set it up as a quad and it felt just as good! I’m using a bit of everything, I’m not stuck in any way, I’m going to try it as a twin too as it works in all the settings I’m just trying to figure out which one is best for me.

Looking ahead to the tour, it’s fantastic that GC is 100% on, with regards to the other events like Tenerife..we will have to see, it’s not definitely not on! Considering the conditions, the world’s best put on a spectacular performance at the weekend in Pozo. With no official competition, sailors took to the water... Finally, on day six of the competition in Gran Canaria the wind and some small waves appeared. Not enough to run an official competition,  but...

Considering the conditions, the world’s best put on a spectacular performance at the weekend in Pozo. With no official competition, sailors took to the water...

Finally, on day six of the competition in Gran Canaria the wind and some small waves appeared. Not enough to run an official competition,  but... 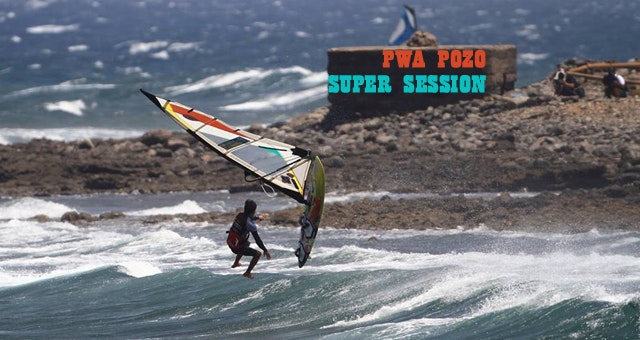 There is only one thing that can beat outstanding moves and that is some pretty big wipeouts. Considering the conditions, the wipeouts went off the... There might not have been any official competition in Gran Canaria, but there was still plenty of action. If you missed it over the weekend...