With the test complete our review on the new Witchcraft Slayer is ripe and ready for your viewing pleasure. We’ve had Adrian Jones on the case, a man with a beady eye and treasure trove of knowledge, enjoy the read and scroll to the bottom to find out where you can test these sails. 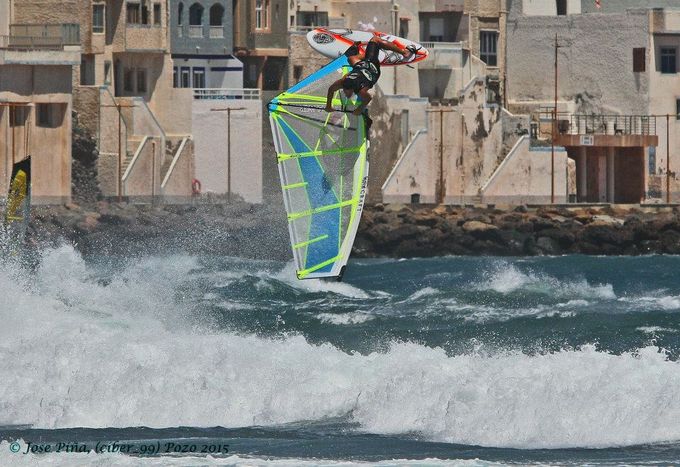 Thanks to a huge amount of passion, hard work and a considerable dose of innovative thinking, Bouke Becker has grown Witchcraft over the years from a small custom wave board brand in Fuerteventura, to a brand recognized Worldwide, acknowledged for the toughest construction in the game and boasting a strong cult following right across Europe.

There is no doubting the boards are unique. Bouke isn’t one for copying other brands. He likes to innovate and prides himself on his thoughtful and scientific approach to design. The result, are boards that in general are very unique and ride quite differently to the rest of the market. Some people absolutely love them… and some don’t. But what is undeniable is the level of passion, thought and engineering that has gone into each design.

So when Witchcraft announced that they were releasing a sail range, we had no doubt that they would be unique. The question was, how would their first production sail stack up?
True to their heritage, Witchcraft are only focusing on the wave market and have released two complete wave ranges; the 4 batten ‘pure wave’ Slayer and the 5 batten ‘power wave’ Karma.
Let’s see how the Slayer stacks up! ON THE BEACH
With no idea of what to expect, we rolled out our 4.5m Slayer and have to say first impressions were good. The sail both looks and feels extremely well built. There is loads of reinforcement, extensive double seaming, loads of ply and clearly a lot of attention to detail. Despite all of this, the weight is still pretty good at 3.68kg’s (which is around the mid point of other brands sails that we have tested).
Witchcraft are keen on a higher aspect design (more area higher up) as they feel this gives the sail better low-end range and performance in between the wind shadows of the waves. This ethos is prominent on the Slayer. It’s not extreme, but certainly gives it a taller looking profile with a longer luff than most. To give an example, a Simmer Icon 4.5m has a 385cm luff, whilst the Slayers luff is 20cm longer at around 405cm.
To compensate for the longer luff, the boom length is short. Witchcraft claim that the extra power these higher aspect sails deliver allows you to use a smaller size and as such a much shorter boom than equivalent brands making the sail feel more maneuverable in the hands.
The Slayer doesn’t offer a visual tuning guide, but isn’t too difficult to set. We found that naturally the sail liked to set with a fuller profile than most. This is down to Witchcrafts’ ethos on seem shaping. Most sails look visually flat when rigging on the floor, and rely on the wind to ‘fill the sail out’ to provide fullness. Ezzy are unique in the wave market (although it could be argued that the Severne Blade Pro follows a similar design direction) in that they actually build fullness into their wave sails using seam shaping. This has benefits, but also has the drawback that the sail will not go flat and completely depower when riding. Witchcraft have designed their sails to be somewhere in the middle of these two design concepts. So we get some pre-set shape, but also the ability to depower to some extent. It’s also worth noting that witchcraft have designed their sails to incorporate increasingly more seem shaping as the sail sizes of their range increase. This is intended to give the bigger sails a more ‘grunty’ and powerful character compared to the smaller sizes.
We found the Slayer set best with not too much downhaul. Never-the-less it still has a relatively loose upper leech for a wave sail. Increasing downhaul doesn’t really reduce the shape much, but definitely increased the loose leech and therefore reduced the low-end credentials of the sail without gaining much advantage at the top end. We therefore got the best wind range and overall performance from the sail with lower amounts of downhaul.
When it came to the outhaul, we found this quite critical to get right and best with around 2cm of positive outhaul. Less than this and the sail lacked feel in the hands. Too much and the power was killed off prematurely. About 2cm positive did the trick pretty nicely for most conditions.
If there is a criticism, it’s the cosmetic detailing and graphic design. It’s not a bad looking sail and of course beauty is in the eye of the beholder, but in terms of graphic design and detailing, with such things as plastic scuff pads, badges, moulded fittings, VTS rigging guides etc it’s a small step behind the leading brands at the moment when it comes to appearance. I am sure with a few more years of evolution and some sales volume under their belt, they will be in a better position to invest in these kind of cosmetics. You definitely get that impression that no corners were cut when it came to design and construction, but after that, there probably wasn’t much budget left for the cosmetics! Fair enough. ON THE WATER
Given Witchcrafts unique approach to design in general, it’s no surprise perhaps that the Slayer is a very unique sail in the hands. It’s actually a pretty interesting sail indeed.
The end result is a sail that is one of the most ‘forgettable’ in the hands wave sails we have ever used for riding. And that’s a good thing. The windier, rougher and more gusty conditions got, the more it became apparent just how smooth the Slayer was and how much it ironed things out. It has an uncanny ability to ‘numb down’ the conditions when wave riding. It just seems to get rid of the wind and smooth everything out when other sails would have a bit of a fight going on. This is the absolute strength of this sail. Whether you are learning to wave ride and want a sail with impeccable manors to allow you to focus just on the board and the wave or whether you are an advanced wave rider who wants freedom from the rig to surf the conditions, the Slayer is without doubt one of the best sails we have ever used in this respect.
The power delivery is very soft and progressive with a pull point that feels ever so slightly rear of center. That said, when the board sent a big impact through the rig ie landing a jumping or hammering out through the waves, a slight ‘buckling’ was noticeable which would suddenly and momentarily move the power point well forward. We have experienced this on other 4 batten sails and basically you adapt to it, but at first it feels a little unusual and can result in a few quick trips around the front!
The attributes that make the sail so good on the wave face seem to work against it a bit in other areas. Despite what the ‘sales spiel’ says about low-end power, we definitely found this sail (in this size – which is important as Witchcraft claim to have altered the seem shaping of each sail through the sizing) more suited to the upper end of the power spectrum. In the lighter air, the power isn’t bad, but we wouldn’t describe it as a powerful sail. That unique ability to ‘remove itself ‘ during wave riding makes it equally a bit vague and lacking response in a straight line. You can sail the Slayer ridiculously overpowered and it seems to just numb down the conditions and make everything feel pretty effortless. However trying to work the sail onto the plane, just lacks the feel, feedback and sharpness of response that some sails can offer. For wobbling out conditions its actually pretty good as it has pre-set shape and gives reasonable grunt, keeping its shape and drive even in the lightest of winds. However as soon as the wind gusts enough to get planing, the sail seems to still be asleep, not having the sharpness, reaction or drive to get on to the plane as quickly as others can.
At speed, the sail is just too smooth, soft and well mannered to be able to drive it hard and get the absolute top speed from. A gust hits and rather than accelerate the board faster, it just seems to puff through almost un-noticed. The Slayer is a real cruiser in a straight line, not a racer! And this also has a bit of a knock-on effect for jumping. You can jump it and it’s extremely easy and well mannered in the air, but you wont be hitting the ramps with the same speed or getting the same lift in the air as you can on other sails. 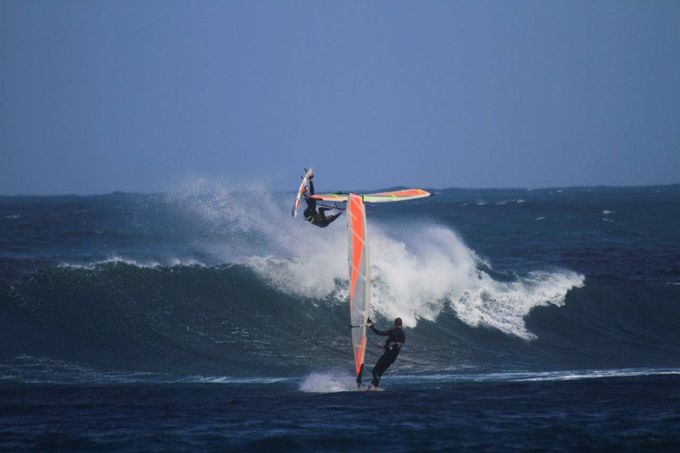 OVERALL
Hats off to Witchcraft. In year one, they have produced a sail that looks to be as bomb proof as anything out there (time will tell) and performs in a very unique way. It offers unrivaled smoothness and ‘forgettability’ on the wave face. It will assist and flatter those learning to ride, just as much it will impress the expert looking to get as close to that effortless surfing feel as they can get on a windsurfer.
The trade-off is a lack of early planing, acceleration and a somewhat anaesthetized feel in a straight line. If you like to plane early, blast around and hit every jump in sight then this will probably be an issue. However, if your priority is wave riding and you are one of those sailors who simply finds the rig an inconvenience to your wave riding, then you will love the Slayer.

FOOTNOTE: Witchcraft sails can be tested at the TWS in El Medano, Cutre in Pozo, Witchcraft on Fuerte, Sailrepair in the UK and Boardrepair in Holland. 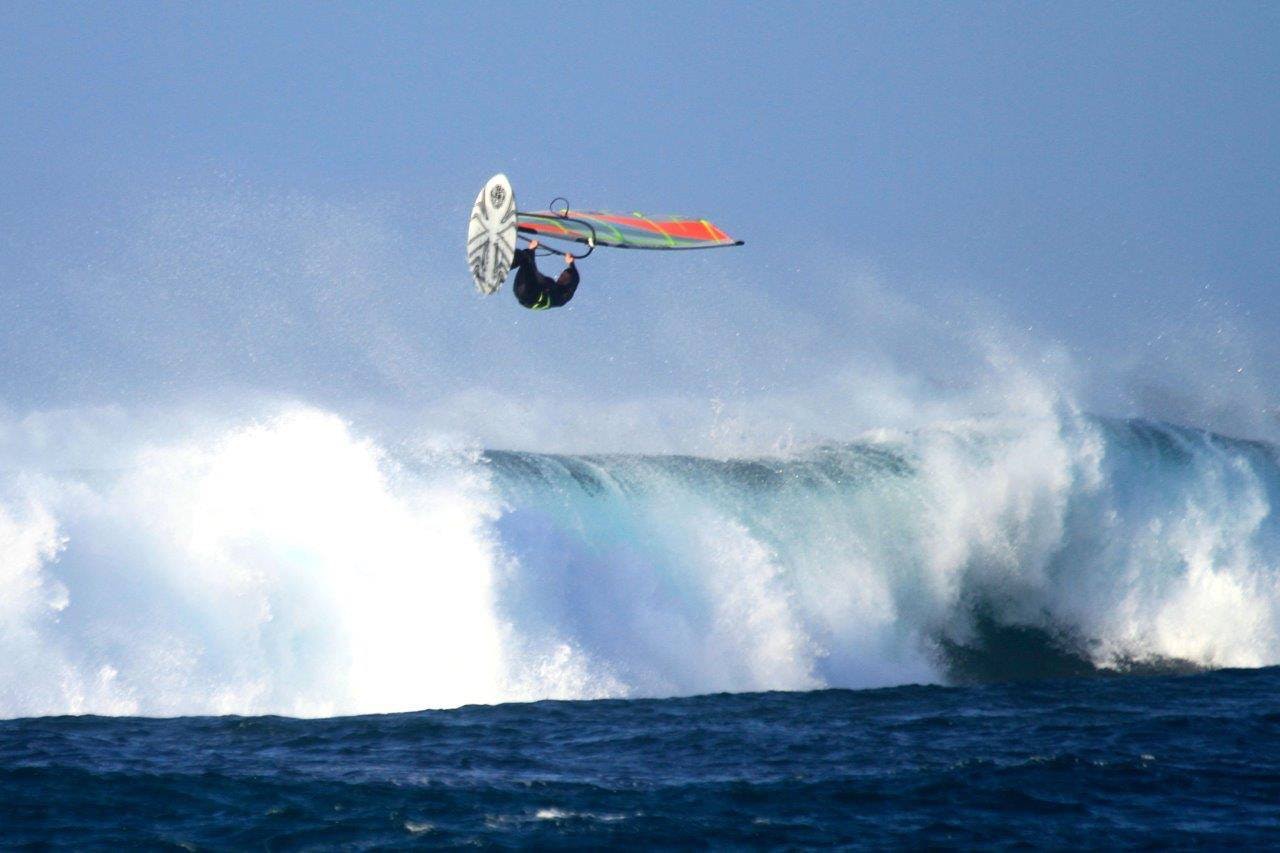