With much of the double elimination complete yesterday the main topic of conversation is that of the title race. Having unfortunately cancelled Chile, the PWA wave world champion will now be decided in Maui. Waves are forecast and what could unfold in about 12 hours will put either Alex Mussolini or Marcilio Browne at the top of the PWA podium for 2013. So how did it get from seven contenders down to just two and who do you think will win? Read on and cast your vote below.

Philip Koester, Alex Mussolini, Marcilio Browne, Victor Fernandez, Thomas Traversa, Leon Jamaer and Ricardo Campello all stood a strong chance to take the title at the start of the day. As the heats progressed, the possible contenders dropped one by one until the final two.

The first heat of the day saw three potential world champions, as Philip Köster, Victor Fernandez and Ricardo Campello along with Laurent Guillemin all competed for a place in the second round. Koester, who was bravely battling a staff infection in his leg, made a strong start to the heat as he landed a one-handed aerial, but unfortunately he couldn’t find another solid wave, as a result Fernandez and Campello advanced, meaning that there will be a new men’s PWA Wave World Champion for the first time since 2011. Koester is now recovering in hospital and we look forward to seeing him competing for the world title again next year.

The next potential world champion to fall was Leon Jamaer after the German failed to advance from heat nineteen, as Casey Hauser and Klaas Voget booked their places in the next round, also knocking out a former world champion in the shape of Francisco Goya.

Elsewhere in the first round of the double, the legendary Robby Naish began his comeback by navigating his way through heat seventeen. Naish demonstrated his classic fluid style to progress along with John Skye, who won the heat after connecting aggressive turns with a perfectly executed goiter.

The opening heat of the second round was another incredibly high pressured fight as close friends and team-mates, Alex Mussolini and Thomas Traversa, competed against Russ Faurot and Robby Naish, in a heat which had the possibility of ending either of their title dreams. Traversa sailed a fantastic heat, the highlight being a radical goiter executed high over the lip. However, it wasn’t as plain sailing for Mussolini, who at one stage had his title dreams in tatters with Faurot in second place. Credit, where credit is due though, as the Spaniard dug deep and crucially didn’t panic, as he responded with a big aerial and a couple of vertical, aggressive hacks to keep title charge alive.

In heat twenty-one Marcilio ‘Brawzinho’ Browne achieved the highest scores of the day, so far, as he showed his determination to fight for the 2013 title. Browne combined fluid turns with air takas and goiters to advance with Fernandez, leaving Jules Denel and Casey Hauser disappointed.

Robby Swift also looked like a man on a mission today as he booked his place joint fifth, for the time being. The Brit showcased his gouging turns, which sent the spray flying by the bucket load, with massive goiters, which earned him the highest single wave score of the day – 8.7 points. Swift will now face Josh Angulo, Alex Mussolini and Marcilio Browne, meaning he could play an integral role in deciding the title race.

Alex Mussolini and Marcilio Browne both dealt brilliantly with their nerves as they battled their way through several grueling heats to be the only two sailors left standing in the 2013 PWA Wave World title race. Tomorrow though, is truly crunch time. The first heat of the day will see the two title contenders take on Josh Angulo and Robby Swift in one of the most eagerly anticipated and intense heats for a long time. If Angulo and Swift were to advance then whoever finishes in third place will be crowned the champion of the world, however if both Musso and Brawzinho advance then we will be left with a mouth-watering, nerve jangling, man-on-man heat. The winner of which rightfully claim the PWA Wave World Championship for the first time in their careers.

“Ah man I feel good. It was so stressful for me when I lost that second heat – in the single – I just said to myself I’ve just got to get over that and enjoy it. You know man I’m really happy, I have so much respect for Musso and whoever wins, I see it as fair and I just want to go and keep on enjoying myself.”

Alex Mussolini finally found his Ho’okipa rhythm just in the nick of time:

“Today finally, I started to sail Ho’okipa how I know I can sail Ho’okipa. Today I managed to sail how I want to sail at Ho’okipa. I was having some issues in the single elimination and probably if I didn’t sail like this I wouldn’t be in the position I am now, but it’s quite exciting that it’s me and Browne and it’s also cool that me and Browne managed to knock out a previous world champion – Kevin Pritchard – Whoever wins I’ll be happy either way, but we’ll see tomorrow.”

Tomorrow promises to be one of the most exciting days on the PWA World Tour this year, with both the JP Aloha Classic Champion and PWA Wave World Champion set to be decided. The forecast for promises excellent wind and yet more waves, which should result in an enthralling day of sailing with at least one sailor set to write their name in windsurfing history. Who is your money on for the title? 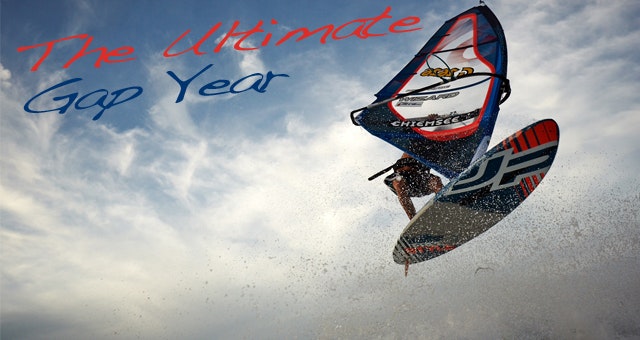 For many a teenager the thought of going straight to higher education or into a full time work directly after school can be a bit...