The next PWA wave tour event will take place in Klitmøller in just a few days time. Kicking off on Monday 16th September, many of the pros are already in Denmark testing the conditions and readying themselves.

Last year it was Thomas Traversa that was victorious, beating Koester in the lighter conditions, but can he do it again this year?

“I believe in myself more. I’m not like ‘oh, I’m going to lose, I’m going to lose’, I know I have a chance, It’s good,” Traversa said. “After the win last year, I won the first mission of the Storm Chase in Ireland, I did well in Tenerife for the first event (of the PWA Wave tour, where he finished fifth behind the winner, Köster) and I’m a bit more confident.”

The win in Denmark last year, his first on the wave tour, when he became the first person to beat the 19-year-old double world champion Philip Köster since 2010 (not once but twice, after defeating him in the elimination round too), has not just given him new belief. It was a David beats Goliath moment for the whole tour as the 60kg Traversa outscored the 90kg-plus Köster. It made a star of Traversa, the 27-year-old Frenchman from La Ciotat, the small French town near Marseilles where the first motion picture was shot.

Traversa’s choice of his main rivals in Klitmøller comes as no surprise; Philip Köster, the German winner of the wave tour for the last two years and Spaniard Victor Fernandez Lopez, second on the tour last year. Traversa’s friend Alex Mussolini and Ricardo Campello, who were third and fourth in Tenerife respectively and have the quality in all conditions, will also be in the mix.

“When the conditions change then the best guys change,” Traversa said. “But the two who will always be dangerous are Philip and Victor because they’re really focused and they stay good in pretty much everything. This is the thing I learned from them.

“I trained a bit more with double (forwards) in the winter, but I’m still not controlling them as well as the other guys. I realised that the way I sail, from last year’s good results, I can do good like this, so I focus more on every time I go out trying to be consistent. In the past, I was crashing a lot.”

The man who confesses that it is not all about competing for him and that he “still likes to windsurf more than I like to win,” is looking forward to being back in Klitmøller, which has long been a place of pilgrimage for windsurfers in the know. “Klitmöller is a good place, and you can feel that it is kind of “the” spot in the North Sea, where there are a lot of windsurfers, surfers – people appreciate what we do in the water,” he said. “Having this event on the wave tour is a good thing because it gives us a chance to show some different skills when a storm hits the coast, and we always see some new people doing well in this event, it is really open.”

Traversa cannot resist signing off with a hope for a repeat of the messy onshore conditions that last year favoured his wave riding skills over the big jumpers.

“I just hope there are good conditions again in Klitmøller so I can have a good result, because all my best results have been in Denmark so far,” he said. “I hope it’s onshore and difficult so everybody struggles (he laughs).”

Traversa may partly get his wish with 25-27 knot westerlies, gusting to 33 knots forecast for the start on Monday. That means they will be more cross-onshore than the traditionally ‘perfect’ conditions that south-westerlies produce.

Before the start of competition the sailors will be introduced to the new patron of the event, HRH Crown Prince Frederik of Denmark. The Crown Prince, a former Danish Navy Seal accomplished sailor and iron man triathlete, will try his hand at windsurfing on Sunday, September 15, before the pros take over. 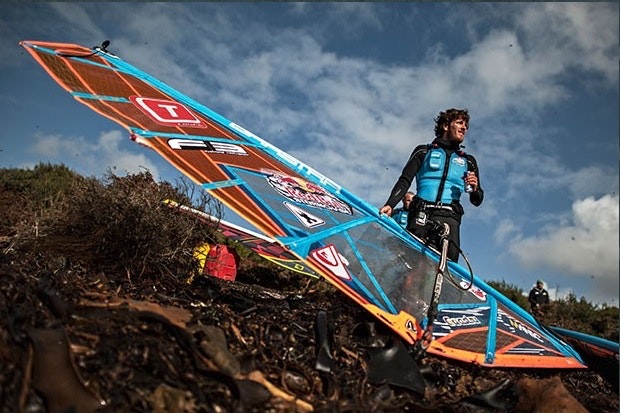 The organisers of the Red Bull Storm Chase have announced that as of October 7th they are back on hold, waiting for the final instalment...

The organisers of the Red Bull Storm Chase have announced that as of October 7th they are back on hold, waiting for the final instalment...