Merry Christmas to all our readers, our regulars and fans of Boardseeker news. Here is the final instalment from the one and only Bjorn Dunkerbeck, great action on the tandem with his son. Turn the volume up, it’s awesome.

We are going to leave it that for the last video, and the last news post comes from some UK action, Adam Sims has been scoring it at his homespot in Camber by the looks of it, although know pictures/video yet… Check the latest update on www.adamsims.com.

Well here it is ladies and gents, our last news post before the brief Christmas break. So where do we start… well how about a bit of home ground action, yes the UK and much of Europe’s West coast will come alive this next week as big fronts and decent swells rip across the Atlantic to provide an almost Autumnal week ahead. Exciting times for many as they weigh up the prospect of family against windsurf time, the question is what will you choose, let us know in the comments below…

With the big day just around the corner, let’s fire up a couple clips that have cropped up over the weekend. The first is of the perfect freestyle spot that is Camocim, a number of clips have come out of there lately but this one really focuses on the locals and their outstanding abilities! Introducing Hugo de Souza (15), Josè Santos (17) and Jamilson (19) as well as a cheeky flash of the PWA freestyler Edvan de Souza.

Up next is the other place that has been hitting our screens a lot over the last few weeks, Chile. It looks like Robby Swift has been joined by all the boys at some point or another as another edit comes out from Clive Boden who pieced together this one that features Ricardo Campello, Robby Swift and more. Watch them catching endless lines at Matanzas.

Totally addicted to windsurfing? Well this guy is, and this is part 2.

Up next is just a short clip but it comes from a talented young UK windsurfer, Nic Hibdige. Spending his wintery weeks in Bonaire, he literally just released this super clean shaka late last night. It looks like the Caribbean islands are no let down then. Certainly one to keep an eye on Nic also has a blog which will soon become a website, watch this space.

That’s about it this morning but head back later for the final wrap of the day. This time last week we posted the epic new 2013 PWA Tour Calendar (check it here). Well we have been probing around and got all... The Moreno twins, Daida and Iballa are two extraordinary girls. Hugely talented and extremely passionate about everything that is to do with windsurfing the two...

This time last week we posted the epic new 2013 PWA Tour Calendar (check it here). Well we have been probing around and got all...

The Moreno twins, Daida and Iballa are two extraordinary girls. Hugely talented and extremely passionate about everything that is to do with windsurfing the two... 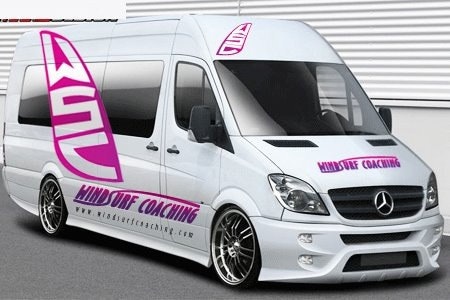 Pimp My Ride with Windsurf Coaching

Colin ‘Whippy’ Dixon and Marco ‘Dancing’ Wedele produced a cracking coaching DVD recently. Stepping outside the box the boys threw angles out there that we...

Pimp My Ride with Windsurf Coaching Aloha Windsurfing Clinics Spring 2013 The Aloha Clinic dates are set with professional instructor Shawna Cropas and Matt Pritchard. No matter what level of sailor you...