After signing out yesterday with UK Wave Champion Ben Proffitt let\’s sign back in with him, with this perfectly timed video upload of his first 3 weeks in Australia. More at www.thewetdream.co.uk

Now here is a name you should get used to, Manuel Grafenauer. The mind behind the inspiring Gaining Grounds windsurfing movie has produced this clip of Flo Jung and Boujmaa Guilloul in Morocco. In this short video is a few moves that have rarely been caught on camera let alone video. Expect to see more from Grafenauer in the future, for now, enjoy…

Boujmaa is probably one of the most radical riders in the World, pushing his limits in triple loop attempts, forwards in to back loops and what is that blackshot move all about? Needless to say the guy has \’No Fear\’. Which leads us neatly on to our next story. No Fear have recently released a competition to win a no-holds barred trip to Las Vegas. All it requires is a short video by yourself, displaying why you think you have No Fear. Enter here at www.fearlessfred.co.uk

With waves and videos on the mind, here is another to get you motivated for a weekend of action. The Wave Oléron Classic took place on Oléron Island, SW France during the second weekend of November. Winds were on the lighter side but the waves were clean. Taking 1st place Regis Bouron, 2nd Jean Mat De Ridder and 3rd Fréderic Pasteur. Thinking of going next year and want to start practicing your french? Then take a look at the full event report here www.wind-oleron-club.fr

As we reported on earlier in the week Philip Koster took the title at the SupremeSurf Big Days contest over in Germany. Here is SupremeSurf\’s own take on the action.

The last video for today then and it can only be Team Patrik going full speed in the South of France.

A final sign off note from Irelands, Mikey Clancy (www.mikeyclancy.com) who has been blogging about his endless quest to find that pot of gold. It looks like the search is paying off… 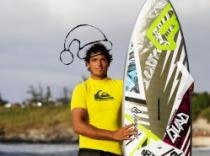