We start today with some news from the Southern Hemisphere at the 2012 Downunder Pro. The formula championships have now wrapped up with Brazilian Paulo Dos Reis, the current world number one, taking the win after seven races. Read all about it here.

Now, from the Southern Hemisphere to the Northern and a huge climate change. We\’ve seen footage and photos coming out of people braving the elements as winter settles in, but our award for the hardest of the harcdore (so far) has to go to Mathias Genkel from Germany. Over on his website Mathias has some great shots of him battling it out against the cold and a write-up of the sessions, including wading chest-deep through an iceberg field! Have a flick back through the rest of the posts as there is some great stuff on there.

From one sort of hardcore to another now…On Monday we posted Daida Moreno\’s video of her 2011 review with some epic wave action. We were a bit shocked to see it posted under the title \’Hardcore in slow motion by Daida\’ over on WindsurfAddicts – that\’s one way to grab our attention!

Nayra Alonso reports from Cape Town that she is into the last week of her stay there and has been exploring the coast. The upcoming forecast also has her a little…\’apprehensive\’ shall we say. Check it out.

Also blogging away is Austrian freestyle whizzkid Max Mattisek. After landing in Bonaire he was stuck without his gear for a while but seems to \’crushing\’ it on the water now if the photos are anything to go by. More here.

A quick reminder about the Defi WInd race in a couple of months time. Kicking off on May 17th, the ultimate windsurf race, held in Gruissan, France will hopefully have the great turnout it has had in previous years. If you\’re interested in entering, head over to defiwind.com

A quick video from Matt Pritchard now. Down the Line shows Matt sailing at Kanaha a few days ago and scoring, ooooh, loads of turn on a super long wave. One pesky kiter aside and it could be paradise!

For your video fix, check back later on for our PM update. Have a great day.

PM Update - Massive waves, massive crossings, an apology from a pom to an Aus and more... 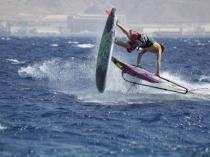