North Sails have released some images of four-time world champion Gollito Estredo back on the water. Gollito injured himself in Brazil at the end of last year, but is now out ripping again and he is hungrier than ever to reclaim his world title. Read more on the North website.

The Formula Windsurfing European Cup Tour have finalised details of the 2012 event schedule. With the addition of the Conil Cup in Spain, the tour now has 8 stops and promises to be an exciting spectacle. Head to the Formula page for further details and to stay up to date with all the latest news.

More news from Spain now, where the RS:X World Championships have wrapped up. The final day saw ballistic winds batter Cadiz once more, forcing the sailors to stay ashore and finishing the event without the final medal race being run. The victor in the men\’s fleet was Julien Bontemps from France, with Israeli Lee Korzits topping the podium for the ladies. As an incredibly windy event draws to a close, check out a video summary of the competition below…

Over on the K4 Fins website, top wave sailor Graham Ezzy has been testing out some new fin combinations. Sharing some insight into his setup for different conditions, Graham confirms that size definitely does matter!

The EFPT have caught up with the JP-Australia freestyle team to get their thoughts on the training paradise that is South Africa. Steven Van Broeckhoven, Andy \’Bubble\’ Chambers, Maarten van Octhen and Youp Schmit spill the beans on what makes Cape Town so good for training, the new gear, new combination moves and what 2012 has in store for the team. Head to the EFPT website to read the interview and check out a nice slideshow of the action below…

UMI Pictures have shared a great interview with Dan Kaseler. Former designer for Gaastra and Vandal sails, Dan has set up Avanti Sails with Finian Maynard. In a very frank interview, Dan reveals what sets his brand apart from the rest and what to expect from them in the future. A good read. See for yourself HERE.

The American Windsurfing Tour caught up with Katie McAnena as part of their \’Rider of the Week\’ series. Paired with some awesome photos, find out all about Katie and what is in store for the Irish starlet by clicking HERE.

More video action is in store in our PM update, so be sure to check back later! 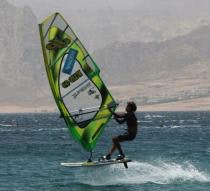 AM Update - The wind picks up in Italy, Dahab Freestyle with Bubble, Red Bull Storm Chase, 2012 - the year of Techno and more...