Kicking off today in Austria is the first PWA Freestyle event of the year. The Surf World Cup promises to be an exciting start to the season, as the world\’s best freestylers battle it out at Podersdorf. Steven van Broeckhoven won his very first PWA event here last year and then went on to win the overall world title.

His main rivals for the title are undoubtedly four-time champion Gollito Estredo and Bonairean combo-master Kiri Thode. Which of them will come out on top in Austria? Or will it be one of the other rising stars such as Davy Sheffers or Dieter van der Eyken?

The forecast is for light winds today with some decent South Easterly wind over the weekend. You can keep an eye on the forecast HERE and check out the PWA\’s event preview on the official website.

As well as the PWA freestyle, the EFPT will be running the CHIEMSEE European Tow-In Championships. With three days of qualifying action, culminating in a huge final on Monday night, the jet-ski will be busy as the sailors put on an incredible night-time show for the crowds! The spectacle last year delivered huge action just feet away from the spectators, so this year should be even bigger and better. Follow the EFPT Facebook page for all the latest updates and check out what to expect in this clip from the EFE Tow-in event last year…

Monday night will not only see the final of the Tow-in Championships, but our sister site Boards will be hosting a LiveChat with Andre Paskowski. If you fancy asking Andre about any of his epic windsurf movies, his future plans and his thoughts on the tow-in comp, click HERE for further details.

Peter Hart recently held one of his famous Masterclasses in Dahab, Egypt. Hosted at the Neilson centre, Peter\’s group enjoyed some awesome conditions all week long and had a load of fun! Check it out below and follow Harty\’s news on the Tushingham website.

Top freestyle Yegor Propetinskiy shares a nice interview on his blog. Check out what Yegor has been up to over the winter, his thoughts on the 2012 Freestyle Tour and news on his windsurf clinics. Read it all HERE. 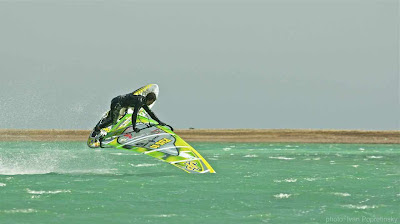 The North Sails team have some news from their team riders around the world. First up is a report from Danish slalom sailor Kasper Larsen\’s trip to Maui. Meeting up with head sail designer Kai Hopf, Kasper got some solid training in on his new 2012 Warp Sails. The conditions certainly look a lot nicer on Maui than in the Danish winter! More HERE.

Fellow North slalom sailor Astrid Muldoon has claimed victory at the French Championships at La Torche in Brittany. The full report is HERE with links to some nice videos of the event.

Our news for the AM update finishes with a link (and nothing more!) to British Wave Champion Ben Proffitt\’s recent escapades at a Polish wedding. Joining in with the festivites with plenty of gusto, Proffitt gave a great account for the Brits! Check out the pictures on his website HERE as well as a short report from his final days at the Simmer photoshoot on Maui. AM Update - Defi Wind crew vs. the Olympics and Voget at it again...