Former British wave champion Jamie Hancock, like many of the top pros, spends his winters training in Cape Town. After a foot injury early on in the trip, Jamie made a full recovery and carried on ripping. “It was a good season in Cape Town with plenty of waves but less wind than usual. Most of the time we were testing and shooting the Gaastra / Tabou 2013 gear but this is some of the footage on the current 2012 boards and sails.” Some great action from Hancock, who has another movie to follow this one, with all the 2013 gear in action.

The 2012 American Windsurf Tour launched yesterday at Waddell Creek in California. Day One at the Goya Windsurfing Festival was a lay day as a passing storm front held off any decent wind. More action is scheduled for tomorrow, keep an eye on the AWT website for more updates. You can check out the list of riders for the season here.

On hand at the event is Chris Freeman from Hot Sails Maui. Lugging a huge amount of kit all the way from Maui, Chris reports that the Demo Day in Waddell Creek was a big success, read more HERE and keep an eye out for futher updates.

Also on the move with a tonne of kit are the Moussilmani Brothers. Check out this shot of the boys on their way to Korea for the PWA Slalom World Cup on their Facebook page. That\’s a lot of kit!

The action at Ulsan will kick off tomorrow as the Slalom fleet go head-to-head in South Korea. With 7 days of racing scheduled and a good forecast for early in the competition, it promises to be a week packed full of action. Bjorn Dunkerbeck, the current world champion, won the event here last year and was also the victor at the season opener in Italy. He will, as ever, be a tough opponent to overtake. Snapping at his heels will be Gonzalo Costa Hoevel, who had the victory snatched away from him by mere inches in Italy, as well as the hugely experience Antoine Albeau.

In the ladies fleet, Karin Jaggi is the top seed following the action at Reggio Calabria. The winner of the second elimination in Italy, Valerie Arrighetti, is sure to be the main challenge for the top spot. World Champion Sarah-Quita Offringa is once again absent from competition, meaning that Turkish bullet Lena Erdil could once again see herself on the podium after a second place in Italy. Make sure you keep an eye on all the action at PWAWorldTour.com

Club Vass is getting itself ready for another action-packed summer in Greece. With an unbelievable \’2 weeks for the price of one\’ offer for peak season in August, head on over to the CV Facebook to get your booking in!

Just up the beach, the Ocean Elements team are eagerly awaiting their first guests of the season. With a huge new kit rack and loads of new 2012 Starboard and Tushingham gear, the centre opens on Sunday. There are still some spaces left, so if you fancy a week\’s windsurfing in Greece for an amazing £299, head over to the OE website HERE. The forecast looks fantastic for May too!

With two new sizes in the range, SeaSprite Sports are stoked to announce the arrival of the new RRD FireMove. “The Fire Move 130 and 140 are the perfect boards for those looking for great early planing performance, easy top end speed and fun in light to medium winds and choppy waters without sacrificing manoeuvrability, and will definitely put the Fire back into your sailing!”  More details on the 3 available constructions on www.robertoriccidesigns.com and find your nearest retailer on seaspritesports.com

Graham Ezzy shares his latest \’Foto Friday\’ over on Surf-Matic.com – plenty of more interesting images to keep you entertained and intrigued.

Belgian freestyle whiz-kid Dieter van der Eyken has uploaded his report from the Surf World Cup in Austria. Finishing in an excellent 9th place, find out what Dieter thought of the event and the result by clicking HERE. 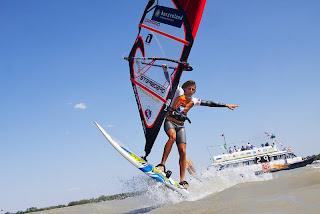 That\’s all the news for this morning, we\’ll be back this afternoon with some sick video action in the PM update. Make sure you check out BigSalty.co.uk to get the forecast for the long weekend in your area!

AM Update - Fabian and the Phantom, Freeman Flying and JP at Jaws...

AM Update - Fabian and the Phantom, Freeman Flying and JP at Jaws...

AM Update - Team France at the Surf World Cup and Italians on Isla Margarita....