November 1st saw local rider, 20-year-old Morgan Noireaux, storming to victory in the PWA single elimination. In the women’s draw Iballa Moreno took the win just ahead of 17-year-old American Fiona Wylde, who pushed her all the way.

It was an extraordinary day of competition at Ho’okipa Beach Park, with some of the best windsurfing ever witnessed on the PWA tour.

Morgan Noireaux – “It’s been my goal since hurting my foot in last years contest to take it all the way. It feels great to win the single elimination at Ho’okipa; I feel like the only place I know better than Ho’okipa is my own house. I haven’t actually won yet though, so I’m trying to not get too excited. I’m just really happy with how I sailed and hope that I can seal the deal in the double.”

In the men’s fleet it was young local rider Morgan Noireaux who ripped throughout the whole single elimination and then sailed a near perfect final, scoring two 9+ point waves straight off the bat. Morgan’s near perfect wave consisted of the best turns we had seen all day, with hell turn, massive aerial and a super clean taka… and we know Morgan’s got even more in the tank too. But it wasn’t just Morgan that sailed a fantastic final, all four riders sailed out of their skin; it was a four-way exchange with wave after high quality wave; aerials, takas, 360s and more were all on display. Thomas Traversa secured second position with an outstanding wave towards the end, taking him a little closer to a potential overall PWA title. It’s still down to a battle between Traversa, Fernandez and Campello, but surely now Traversa has the upper hand?

Straight after the finals finished it was onto the men’s double elimination, giving all the riders a second chance to make it through. Mershon, Siver, Miller and Katchadourian were the US comeback kids in round one; Mershon won his heat with an incredible lip hitting wave a Levi bounced back from his first round exit, coming back to his true form. But it wasn’t to be, as in the second round Levi couldn’t quite put together the heat he needed, just not getting the waves he could losing out to Ezzy and Swift in the dropping wind and swell of the last heat of the day. This heat was all but canned until Swift unleashed some hacking turns, throwing buckets of spray and establishing himself, along with Ezzy, as ones to watch. Stone, Pritchard and Polakow also made it through round two and when the PWA contest continues will face crunch time against the like of Naish, Guilloul, Campello and Mussolini before the winning riders go on into a man-on-man battle, with the aim of making it all the way to face Noireaux.

The action will continue today at Ho’okipa, but the swell isn’t looking too great; however, there is  MASSIVE swell forecast for the end of the holding period so there is no doubt we will see a lot more incredible action and the champions crowned.

A clip about girls having fun in Punta San Carlos (Baja California) during the AWT (americanwindsurfingtour.com) Filmed and edited by the girls and their friends 🙂 ... 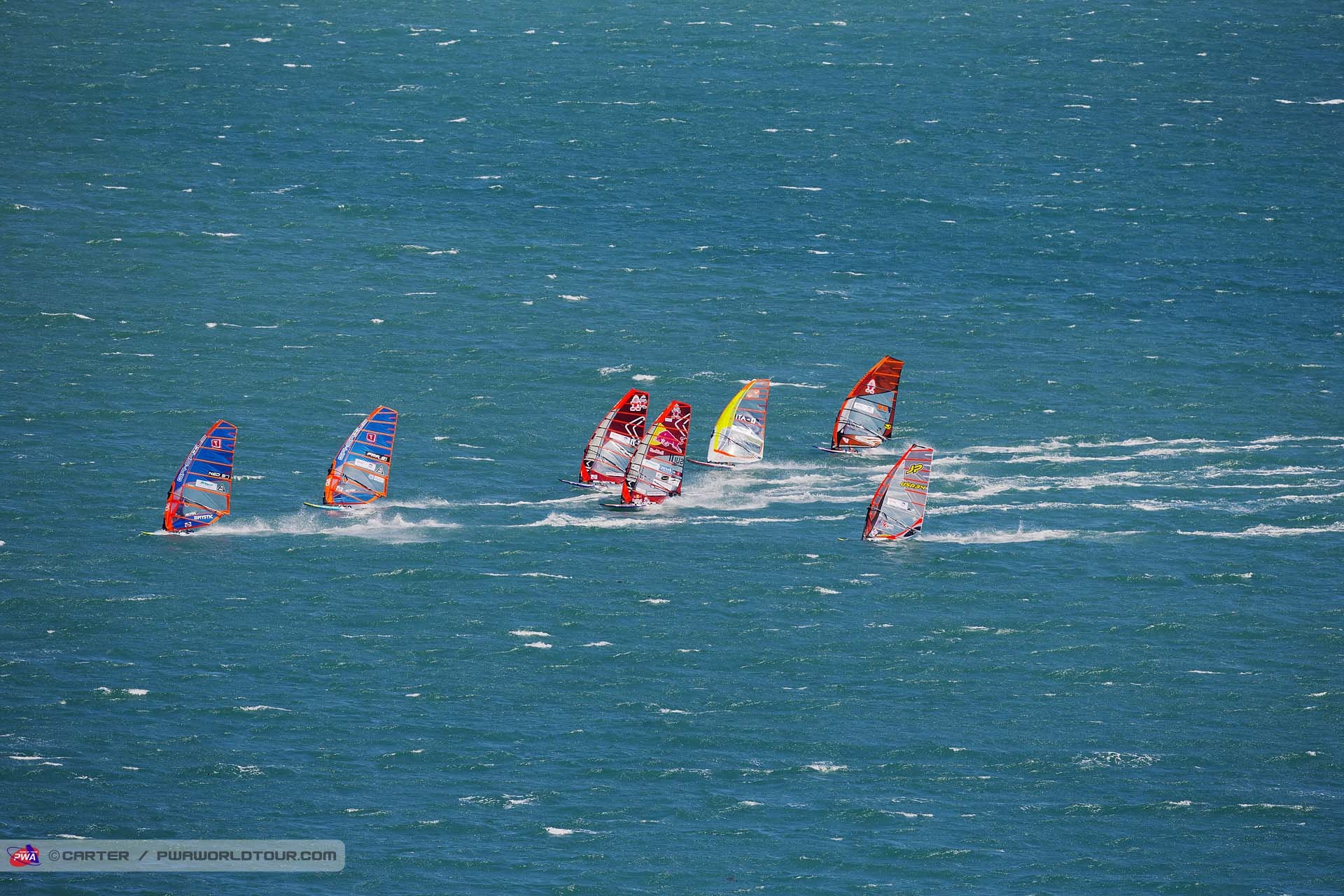 A clip about girls having fun in Punta San Carlos (Baja California) during the AWT (americanwindsurfingtour.com) Filmed and edited by the girls and their friends 🙂 ... In a action packed day the men were able to complete three full rounds of competition in the strong winds. Check the round-up below.