Sean O’Brien reports from the PWA Alacati earlier in the week;  as Delphin Cousin is crowned World Champion and Albeau and Offringa takes the event titles.

The final day here in Turkey. High tensions. A decent forecast. Not amazing but definitely promising for wind! The front of the men’s fleet on this final day was incredibly close with anyone from Albeau, Menegatti, Quentel to Costa-Hoevel able to raise the winner’s trophy above their heads…

A good start in the morning and racing kicked off quite early after 11am for the continuation of Elimination 4. Some big names were already out in the heats including Dunkerbeck and Van Der Steen and later in the semis, Race 3 winner Antoine Questel was knocked out of the final. Despite some pretty gusty winds (definitely dropping under 7 knots on the course at times!) we ripped through the heats and finals and by only 12.30pm the first winner’s final of the day was starting.

It was a showdown between event leader Antoine Albeau and first event of the year winner Alberto Menegatti. Both sailors were out of the gates quickly with Albeau just managing to squeak ahead in to the first gybe to lead in to the next corner. On the final gybe, Menegatti went for a radical inside gybe and caught up to within 1 board length of Albeau as they hit the finish line, but the Frenchman clinched it continuing his lead in the event coming in to the final elimination for the event; number 5.

The winds became super flukey over the afternoon and all of us raced on our biggest kit even with 18 knot gusts coming down the course at times. At each gybe mark it was a parking lot, with usually less than 9 knots meaning only the first 2 guys in to the turn would actually plane out of it, and as a result, tons and TONS of heats were abandoned.

This continued on to the winner’s final where the start was re-run almost 5 times before a lucky gust came down the course at the first gybe and sailors (including the big boys – Albeau, Buzianis, Van Der Steen etc) could actually get planing and head to the second mark. Arnon Dagan added to the restarts with an early start sending him back to the beach before another start was abandoned when one of the marks began drifting (I swear this race was CURSED!).

Finally, the winner’s final had a clean start and Buzianis lead to the first gybe ahead of Menegatti, Albeau and Van Der Steen. Menegatti is easily one of the fastest guys on the planet with his 9.6m Point-7 and Starboard 127 combo and was able to blast past Buzianis on the second run and take the lead, never looking back and winning the race by a decent 50m margin.

Despite the win for Menegatti, Albeau managed to clinch the event win by 1.3 points – so close!!! Menegatti in second and Gonzalo Costa-Hoevel in 3rd … an amazingly close event for the top 5 and probably Menegatti would be sitting around after the event thinking what it would have been like if he hadn’t crashed in the 3rd elimination that his boss and teammate Andrea Cucchi had one (if Alberto had finished 2 places better than his 7th, he’d have won the event!).

Another awesome event in the super flatwater location of Alacati done. Not the most amazing week of wind as this place can really blow (we were tuning up 6.2m’s the day before the contest started in +30 knots!) however with 5 eliminations run it was a successful event and I’m sure everyone had some fun – I know I did! The last stop for the year is in Sylt in one month; one of the more horrific places for windsurfing (ie, cold, rainy, sand everywhere, shorebreak, rock walls) however definitely one of the most watched and well supported events on the tour so we are all looking forward to it! Thanks for reading and see you guys again soon in one month. 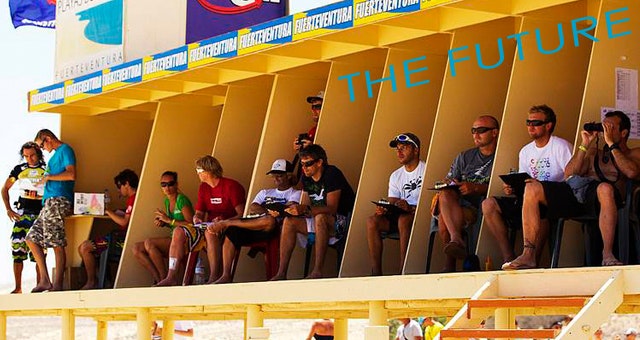